Have a wonderful Christmas
and
lots of like minded friends in the New Year!

“Let’s face it: we all have to deal with criticism from time to time. And no matter how thick-skinned we are, critical words usually sting…

While sometimes it feels as if it would be great to avoid criticism all together, it’s a part of life, and it’s a part that can make us stronger and better…

How to handle criticism positively?

1. Don’t take it personally: try to take a step back from the words and process them from an objective place.

2. Believe in yourself: When you know (and stay true to) who you are, you can be more open to others words because you know they will either ring true to you or they will be so inaccurate that you won’t even need to think twice about them.

3. Realize you can’t please everyone: Every single one of us has a unique perspective of reality influenced by our thoughts and experiences and sometimes our perspective creates different ideas of how things should be.

4. Use negative feedback to inspire you: Listen to the criticism someone is offering you and ask yourself if it might possibly be a good advice. If you decide it is, act on it. Make changes for the better.

5. Learn from the critique. There are two ways you can learn from criticism: (1) you can see the truth it in (if there is any) and strive to make some edits to your behavior, or (2) you can realize that it’s not valid and you can strengthen your own beliefs by sticking to what feels true to you.”

Don’t be too quick to criticise yourself…

If nothing bad is ever said, nothing good will ever get done. 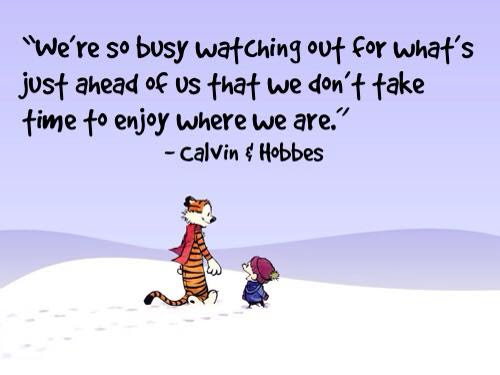 “The ‘dance of love’ has different themes and moods, just like every relationship has its highs and lows… Enjoy the high moments and hang-on during the down times…”

The same with the ‘dance of life’:
enjoy the high moments and
hang in there during the down times….

Have a wonderful weekend

So DO something DIFFERENT today!

“Be happy for this moment. This moment is your life.”

Have a great week full of wonderful moments

“Fathers in today’s modern families can be so many things.”

“My friends Katie and Scott… are both Silicon Valley entrepreneurs who work full-time. About a year ago, Scott travelled to the East Coast for work. He was starting a late-morning meeting when his phone rang. His team only heard one side of the conversation.

“A sandwich, carrot sticks, a cut-up apple, pretzels, and a cookie,” Scott said. He hung up smiling and explained that his wife was asking what she should put in the kids’ lunch boxes. Everyone laughed. …

There’s an epilogue to their story. Scott went on a trip and discovered that Katie forgot to make the kids’ lunches altogether. She realized her slipup midmorning and solved the problem by having a pizza delivered to the school cafeteria. Their kids were thrilled, but Scott was not. Now when he travels, he packs lunches in advance and leaves notes with specific instructions for his wife…”

“The may be an evolutionary basis for one parent knowing better what to put in a child’s lunch. Women who breast-feed are arguable baby’s first lunch box. But even if mothers are more naturally inclined toward nurturing, fathers can match that skill with knowledge and effort…

We overcome biology with consciousness in other areas. For example, storing large amounts of fat was necessary to survive when food was scarce, so we evolved to crave it and consume it when it’s available. But in this era of plenty, we no longer need large amounts of fuel in reserve, so instead of simply giving in to this inclination, we exercise and limit caloric intake.