“Anyone can make a difference, so you don’t have to have it be some huge, global campaign… you can start small, and that’s just as important.”

In 1974, a terrible famine swept through Bangladesh, a nation struggling in the aftermath of a devastating war for independence. Millions of starving people began to migrate from the remote villages of the north to the cities farther south in search of food.

In one such city, Chittagong, lived a thirty-four-year-old economics professor named Muhammad Yunus, who had recently returned from the United States, where he had gone as a Fulbright scholar to obtain his PhD in economics. As Yunus watched the growing influx of starving humanity, he began to feel a huge disconnect between what he was teaching his students at the University of Chittagong and what he was seeing on the streets: the skeletal bodies and vacant eyes of thousands of people literally starving to death. Heartsick and determined to find some way to help, he decided to begin with the poor people in the small neighboring village of Jobra.

As Yunus visited these people, he discovered that most of the “poorest of the poor” were widowed, divorced, or abandoned women who were desperately trying to feed their children. Because they didn’t have money to buy supplies, they were forced to borrow from “traders” and they sell their products back to them for a pittance.

A woman with three children, for example, would borrow 5 taka (about 22 cents) to buy bamboo. After working from morning until night to weave the bamboo into a stool, she was forced to repay her loan by selling the stool to the traders for 5 taka and 50 poysha (about 24 cents). That left her a profit of only 2 cents a day, barely enough to keep her and her children alive.

Like many others in the villages of Bangladesh, this woman was stuck in a cycle that ensured that she and her children would remain in poverty for generations. As an economist, Yunus realized that the only way she could break out of the cycle would be to somehow get the five taka to buy her bamboo so that she could sell her stools for the full retail price in a free market. But there was no one who would loan her the capital at a reasonable rate.

As he searched throughout the tiny village of Jobra, he found that there was a total of forty-two people – stool makers, mat weavers, rickshaw drivers, and so on – who were all dependent on the traders…. In the end, Yunus loaned those forty-two people the money because no one else would, with the simple instructions to pay it back, without interest, when they could… Thus began a new era in Yunus’s life – and in the lives of the poor of Bangladesh…

Although Yunus had no intention of going into banking himself, he ended up doing so… He studied how other banks set up their loan operations, and then he set up a bank, the Grameen [“rural” or “village”] Bank, that did the exact opposite. Whereas other banks tried to delay the borrowers’ repayment as long as possible in order to increase the amount of the loan (making it hard for people to pay), Yunus instituted a daily payment program of very small amounts. He set up support groups and established incentives to encourage borrowers to help one another succeed. And at a time when the banks of Bangladesh effectively excluded women from ever being able to secure a loan, he set the goal that half of Grameen Bank borrowers would be women. 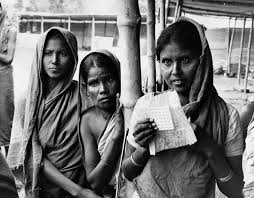 In his book Banker to the Poor, he described a typical Grameen borrower in the early days as she walked from the bank with her loan – typically about $25  in hand:

“All her life she has been told that she is no good, that she brings only misery to her family, and that they cannot afford to pay her dowry. Many times she hears her mother or her father tell her she should have been killed at birth, aborted, or starved. To her family she had been nothing but another mouth to feed, another dowry to pay. But today, for the first time in her life, an institution has trusted her with a great sum of money. She promises that she will never let down the institution or herself. She will struggle to make sure that every penny is paid back.”

Contrary to almost everyone’s expectations, an amazing 98 percent of Grameen Bank borrowers to pay back their loans. (In comparison, the payback rate on a traditional small-business loan is 88 percent.)…

With a growing desire to eliminate poverty on a larger basis, Yunus moved ahead step by step – learning, making mistakes, and adapting to increasing number of people in his vision – people in banking, government, and other related industries. Through Yunus’s leadership, Grameen Bank continued to expand its reach and impact, and to date the organization has made more than $6 billion in loans to more than 8 million borrowers in Bangladesh, 97 percent of whom are women…. In 2006 Muhammad Yunus and Grameen Bank were jointly awarded the Nobel Peace Prize for helping to lift tens of millions of people out of poverty.

From ‘Smart Trust’ by Stephen M.R. Covey and Greg Link